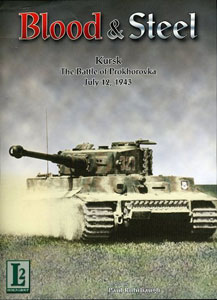 Blood & Steel is a "quick-playing strategy wargame depicting Kursk's climactic tank battle, Prokhorovka. The complexity is Low with only 4 pages of rules. The unit sizes are Regiments & Brigades.

Each player has formations which activate when their chit is drawn. The Soviet player makes decisions on which formations he would like to have on the board and when. Victory conditions are based on geographical objectives, exiting units(German) and not entering reinforcements(Soviet). The combat system has no CRT. You roll a die vs your Attack Factor (anti Armor or anti Infantry)and if the modified result is equal too or less than the value, a hit is scored against that target unit.

Ponyri Station is a simulation of the armored clashes between XLI Panzer Corps and the defending Soviet forces near the small town of Ponyri, reflecting the high water mark of the German Kursk campaign.