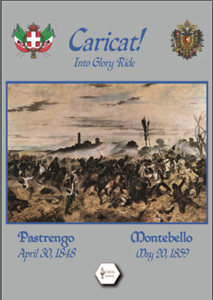 Caricat! is a two-player game depicting battles in Italy during the Risorgimento. The two separate battles shown in this game are recorded especially for the decisive contribution of the Piedmontese cavalry. Pastrengo is a simulation of the battle fought between the Piedmontese and the Austrian Army on the 30th of April 1848, during the first phases of the First Italian War for Independence. Even if a small battle, little more than a skirmish of reduced strategical significance, Pastrengo is famous in Italian history for the glorious and dauntless charge of the three squadrons of Carabinieri (an elite corp that in that period was the personal cavalry guard of Carlo Alberto, King of Sardinia), that saved the monarch, and aided substantially in winning the day. The Battle of Montebello was fought on May 20, 1859. It was the first battle of the the Second Italian War of Independence. Montebello was a minor engagement fought between Italian cavalry and French infantry against Austrian troops and it was the baptism of fire for the Italian Cavalleggeri (light cavalry)