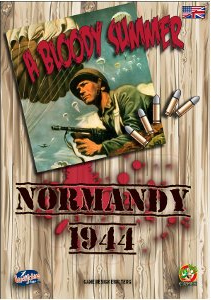 Normandy 44 - A Bloody Summer is a redeveloped version of VaeVictis #27 best seller game (1999). The game has been deeply redeveloped, with new mechanims and a reviewed order of battle (twice as much counters than in its first edition). The units scale is the regiment for armored units and for those which lands on D-Day. Allied airforce is now fully included in the game and can be used by the anglo-american player to influence the outcome of the war. A second map allows Allied to push their units toward Paris or the Atlantic harbors. More details, more counters and a wider map for a more confortable game!

Normandy 1944: A Bloody Summer is a divisional scale wargame, which depicts the combats of the Normandy campaign from June to August 1944.

It includes two scenarios and one campaign game:

- The first scenario covers the drive to Cherbourg, one of the first of the Allies objectives.

- The second scenario starts at the end of July and covers the great Allied offensives, Goodwood & Cobra

- Finally, the campaign game covers all of the operations up to the end of August with the reduction of the Falaise pocket.

1 booklet of rules and scenarios