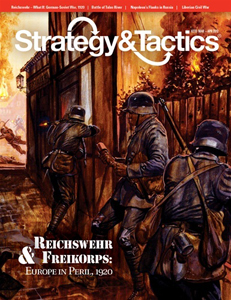 Reichswehr & Freikorps is a two-player (Soviet versus German) strategic level game, designed by Brian Train and Ty Bomba. The game includes 176 large-sized die-cut counters, with the Division as the primary maneuver unit, including Infantry, Naval Infantry, Cavalry and Armored Car units. The colorful map features the German/Polish border, with each hex representing approximately 15 miles across, and includes such prominent locations as Danzig, as well as various charts and tables for easy reference during play.

The game sequence is as follows:

Victory in the game is determined by the accumulation of VPs for control of important hexes, and the arrival of important reinforcements.