Against the Odds 34: Right Fierce & Terrible 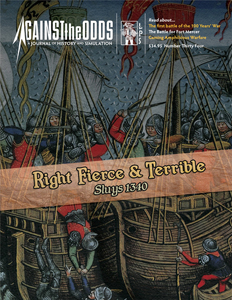 Right Fierce & Terrible simulates the battle in 1340 between English King Edward III and a French fleet assembled to carry King Philip VI’s invasion across the English Channel. It was the first major battle of the Hundred Years War, and although it was a naval encounter – the English fleet attacked their French adversaries in the estuary before Bruges – it was decided by sword, hammer and arrow. Confined to cog and barge, retreat was not an option for marines in this desperate fight. Despite being outnumbered and in foreign waters, the English fleet annihilated its adversary. Edward captured nearly all his rival’s ships and slew a horde of soldiers and mariners that day, boasting that bodies were washing onto Flemish beaches for days.

Designed by Jeremy White, this is an unusual game. Players “build” the battlefield as they go. By navigating their squadrons of galleys, nefs and cogs through the estuary they create the “terrain” upon which the knights and men-at-arms will vie for supremacy. Success hinges on the ability to deliver marines and archers against weak points, or in giving your opponent no choice but to hit your fleet where it is strongest. The English will have the longbow and a high freeboard, as well as the benefit of the wind gauge in many scenarios, but if played smartly the French will manage to offset those advantages, applying his weight of numbers irresistibly against the English king’s bid to rule France. Scenarios treat the variety of questions that puzzle historians about this battle, and since the game is not complex and plays under three hours, it offers a chance to explore many angles of historical interpretation.

Right Fierce and Terrible has one 22 by 34 inch map, oversized die cut counters, accessible rules with extensive illustrated examples of play, and seven scenarios with set-up diagrams for a quick start. Regardless of the scenario played, however, casualties will be horrendous, and there are tough decisions to make. Archery, ramming, grappling and melee are the tools of conquest here. The battle is likely to ebb and flow, squadrons can be captured, liberated, and captured again. Leaders, including King Edward, can also be captured and liberated, or killed by a stray arrow, or if nabbed, executed on the spot. Would Edward’s demise have spared Flanders and France one hundred years of war? Knights can perform acts of heroism to avert disaster, but at great cost to themselves. Each fleet’s morale will gradually deteriorate as the battle grows more desperate…until at last, one fleet finally breaks and the day is won!