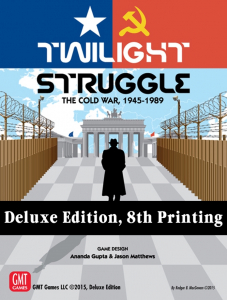 Twilight Struggle inherits its fundamental systems from the card-driven classics We the People and Hannibal: Rome vs. Carthage. It is a quick-playing, low-complexity game in that tradition. The game map is a world map of the period, whereon players move units and exert influence in attempts to gain allies and control for their superpower. As with GMT's other card-driven games, decision-making is a challenge; how to best use one's cards and units given consistently limited resources?

Twilight Struggle's Event cards add detail and flavor to the game. They cover a vast array of historical happenings, from the Arab- Israeli conflicts of 1948 and 1967, to Vietnam and the U.S. peace movement, to the Cuban Missile Crisis and other such incidents that brought the world to the brink of nuclear annihilation. Subsystems capture the prestige-laden Space Race as well as nuclear tensions, with the possibility of game-ending nuclear war.

The deluxe edition, published in 2009 includes the following changes from the basic game: