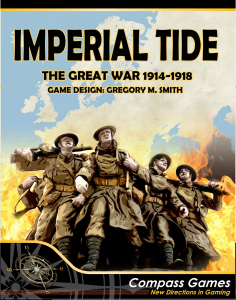 Imperial Tide: The Great War 1914-1918 is a 2-player strategic level game which places you in command of either the Allied or Central Powers during The Great War (World War I.) Each turn consists of a year, during which multiple cards plays occur. These give the players movement, combats, entrenchments, and other actions. At the end of each year, players must make critical decisions on which cards to re-buy in an attempt to win the war outright or to win by placing the other side in a disadvantageous position by 1918. Imperial Tide is based on the popular, action-packed Pacific Tide game system by Gregory M. Smith, with many combat and strategic decisions to challenge players in just a single evening’s game.

The core of the game is the unique card re-buy system, in which players take their annual production (adjusted for U-boats, blockades, and Zeppelin bombing) and decide which cards they need for the upcoming year. Cards not only provide for reinforcements, but allow for movement, combat, and entrenchment. Which cards to rebuy is without question one of the key decisions the player must make to prepare for next year’s operations.

The game has infantry units for all of the major participants, and artillery “units” actually represent stockpiles of ammunition to be used for offensives. Naval operations are mainly abstracted, although sea movement to Salonika and Gallipoli is allowed.

Besides the focus on card play, the game features a small footprint (one standard map) and also is designed to be played in just a single evening – estimated at 3 hours for experienced players to fight the entire war.

One new mechanic in Imperial Tide is the option to conduct “Attrition Combat” instead of regular combat. By using Attrition Combat, you are not attempting to take ground – you are merely attempting to inflict casualties on the enemy and wear him down. This type of combat automatically causes both sides to take losses.

Another new key mechanic in the game system is the use of Resource Points. Each nationality has a set amount, and there is an option to buy an extra point each year. Although mainly intended to replace infantry strength, they are extremely flexible in that they can be used in limited amounts for movement and combat operations. They can be thought of as a sort of “operational reserve” and should be used judiciously by players.

This game is highly accessible to those familiar with Pacific Tide and designed by Gregory M. Smith. The game system lends itself very well to capturing the bloody and numerous battles of World War 1. While Imperial Tide is designed as a 2-player gaming experience, an additional option for solitaire play is provided by the inclusion of a Solitaire Bot. This “bot” creates action priorities for the non-human player, and has the advantage of being simple enough to implement without spending an inordinate amount of time as the non-player.

Time Scale: 1 year per Turn; each turn being composed of multiple card plays.

Players: Two (with option for one)