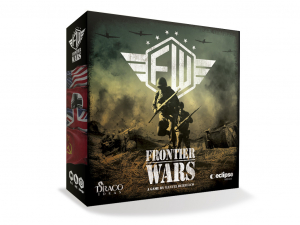 Frontier Wars puts you in command of one of the four most relevant factions of World War II.

You must conquer, build, manage, research and fight to win the game, in a modular battlefield, created with tiles that allow endless possibilities.

This title of Draco Ideas, created by Manuel A. Burrueco, allows from 2 to 4 players from 12 years old, to take control of the armies of the United States, England, Germany or USSR, represented by the 100 miniatures included in the box.

Its set of rules balances fluidity, tactics and fun, providing an experience reminiscent in a way of computer real-time strategy games.

The unit-based combat system as well as the card engine provides great tactical depth to the combat, without the need to include complex rules.

In addition to the possibility of generating scenarios, the game has a book of predefined scenarios that poses balanced strategic challenges.