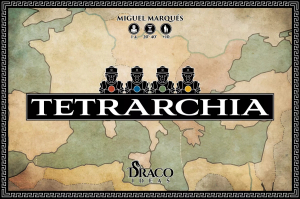 Towards the end of the 3rd century BC, the Roman consul Marcus Claudius Marcellus was nicknamed “The Sword of Rome” for his exploits in the wars against the Gauls and the Carthaginians. Five centuries later, towards the end of the 3rd century AD, the old Republic is too far away and the now Roman Empire seems doomed. Enemies cross the frontiers, revolt spreads through its provinces, and every time a Roman Emperor has the courage and ability to face the threats, usurpers take his place in Rome and increase the chaos. Emperor Diocletian sees only one revolutionary way out: to share divine power with a few trusted colleagues. In a few years he creates an Imperial College together with Maximian, Constantius and Galerius, forming the first “Tetrarchy“. Now the swords of Rome are four, and they are going to fall mercilessly on their enemies… or not…

TETRARCHIA (Latin of Tetrarchy, “leadership of four”) is a cooperative game in which 1 to 4 players take the role of the 4 Emperors, fighting the revolts within the Empire and the Barbarian armies that try to bring it down. With simple rules, the core engine leads to very different games and surprising endings. It is a new edition of the game previously published by the Nestor Games publisher.

Up to 81 difficulty challenges, that you will define in the initial configuration of the game.

That you can combine with up to 5 variants (including special powers and a competitive mode).

That you can combine with up to 3 expansion modules (from Tetrarchia: Dux, included with the game).

With at least 4 historical scenarios, including:

Carausian Revolt (286-296). The most serious challenge to Diocletian, leading to Tetrarchy.

Danube Wars (293-296). A series of campaigns ‘with greater difficulty to maintain the border.

Mauretanian War (296-298). Maximian chases the elusive Berbers to their bases.

Great Persian War (296-299). The joint threat of a Persian army and an Egyptian revolt ends in total Roman victory and a 40-year peace.

The flow of each Emperor’s turn is very simple: spend up to 6 ‘Imperivm Points’ (IP), and then propagate threats with the roll of two dice.

The Emperors can spend their IP in:

Move to a linked province.

Order a fleet to Sail to an adjacent sea zone.

Secure the province by placing one of their tokens.

Subdue the province by removing the Unrest/Revolt token.

Attack a Barbarian army in a linked province.

The players win if they secure the borders of the Empire before the majority of provinces revolt or Rome falls.