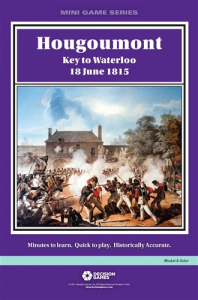 Napoleon faced a desperate situation at Waterloo—he had to defeat Wellington’s Anglo-Allied army before the Prussian army arrived in strength. One of the keys to Wellington’s line was the extensive grounds of the Chateau Hougoumont. Over the course of the day both sides would commit ever more troops to contest the position. The Allies held, but like the rest of the battle, the fight was “a near run thing” that in a moment could have turned the other way.

Hougoumont uses a variation of the Musket & Saber QuickPlay system to portray battle during the Napoleonic Wars. Combat is based on unit quality rather than raw numbers, and rewards use of historical tactics. Infantry—tough and resilient—bears the brunt of battle. Artillery can smash attacks or open holes in enemy lines, but is vulnerable and brittle. Cavalry is weak in stand-up combat, but crucial for pursuit and the occasional charge against a broken foe. All units are susceptible to rout when weakened, so players must maintain reserves. Leaders enhance unit capabilities.

Winning this battle depends on careful deployment, thoughtful maneuver toward key points, proper coordination of arms, and above all timely commitment of reserves.