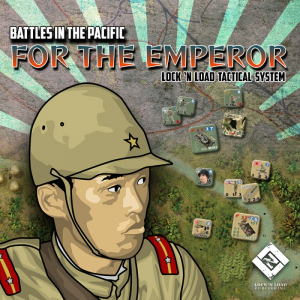 ‘For the Emperor’ is a Battle-pack expansion for ‘Heroes of the Pacific’ from the Lock and Load Tactical system. Included are eight brand-new scenarios. It features fluid, impulse-based turns, squad-level, and individual heroics. The scenarios span the entire length of the war, starting with the Japanese invasion of Wake Island and the Philippine Islands. From the bloody last days of the Japanese on Guadalcanal to the frustrating static warfare on Bougainville.

We witness some of the last and largest Banzai attacks on Guam and Saipan. The close and dirty work of clearing Japanese cave networks on Peleliu and then things come full circle as the Allies return to liberate the Philippine Islands.

For The Emperor, Battlepack is all about the Imperial Japanese Army, and the US Military forces. Get ready to return to the Pacific with “For the Emperor’