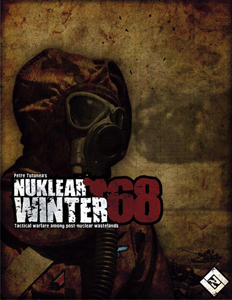 The former German territory, transformed into a wasteland by the nuclear holocaust that ended the Second World War in 1946, is the hostile setting of a new conflict between old enemies clenched in a struggle for the future of mankind.

Surviving Nazi leaders and Wehrmacht forces resurface in 1968 from underground shelters to rebuild an empire from the ashes of the world. Oblivious of the climatic, technological and political changes inflicted by more than 20 years of nuclear winter, they are about to face the mysterious Black Hand - elusive, abhorrent masters of the wastes, and the combined might of the modern, highly mechanized and versatile NATO alliance.

Units represent platoons of vehicles like T64 or King Tiger tanks, infantry, or helicopters. The platoons are grouped into formations and lead by a commander. The formations are activated by chit draw, and better-trained, better-led units can activate more than once in a turn, moving, shooting, and fighting in each activation. On the flip side of a coin, there is no guarantee that a formation will activate even once.