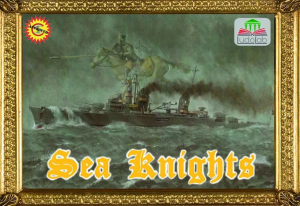 "In the beginning was Naval War, and the AH sought that was a good game.Then was Victory in the Pacific and players were happy.Players tried to link together the games but realized that the rules were different ...And was crying and gnashing of teeth.Then, come Victory at Sea (I and II) and the Light was!"

VaS was realized to satisfy players' desire to play all the WWII at sea but was a hit and miss work due the deep differences between the two games and the limited historical knowledge available half a century ago, becoming a melting pot where almost any player added his personal interest more than the historical one.

After five years spent searching, evaluating, proposal, players' notes (and reading about 50Kg of new books with new datas) we produced a game that gaves you the taste of the WWII war at sea linking together the PTO (fine for start) and the ETO (a real nightmare for the Axis player) in an epic day of play between 2-4 players that, as in the real war, are reluctant allies as, at the end of game, the winner will be only one.

Moreover, all the boxes will also include ADRIA, the WWI Naval game about the Austrian Italian war in the Adriatic Sea, a game by ENRICO ACERBI, one of the best italian game designer.