Imperial Bayonets: We Were Not Cowards – Sedan 1870 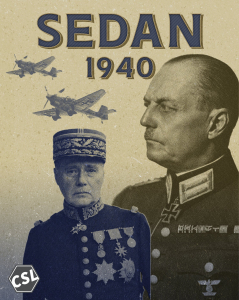 We Were Not Cowards is an operational simulation of the last battle of the Second Empire. It uses a rules-engine heavily inspired by The Library of Napoleonic Battles rules by the illustrious Kevin Zucker and OSG. Several scenarios allow for a quicker french response to Prussian Maneuvers the day before creating a salvageable situation for the French. Each hex is approximately 1KM and units are divisions which can break down into their subordinate brigades. Maintaining a chain of command allows players to freely act with their units, while units outside of command range must rely on initiative. Special rules are included for French Chassepot and Mitraileuse and the obliterating power of Prussian Krupp artillery.

This is game is the first of several efforts to see games our heroic CEO designed a few years ago that have sat languishing among other ideas, priorities and projects. This will include a 22x34” map, 560 0.5 inch counters, several player aids along with 2 rule books.