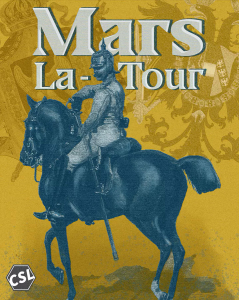 Mars La Tour is an introductory-level wargame with plenty of meat on the bone for the seasoned grognard, inspired by Mark Herman’s recent Gettysburg. With a 17x11 large-hex map, less than 32 large counters, players can experience the furious battle of Mars la Tour in less than a half-hour, easily played several times in one sitting. The OOB and order of appearances are tweaked for historical effect, representing the French at the corps level with some of their less aware forces starting off-map, while Prussians are represented at the division level with their normal historical appearance.