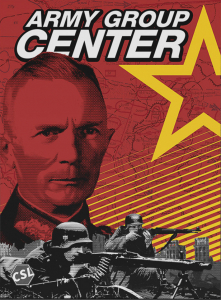 Army Group Center is game 2 of the Barbarossa trilogy of games that can be combined together as a mini-monster. Each game by itself is a straight forward operational simulation of each theater, and all 3 games share the exact same rules allowing for easy integration. Units are Army through Regiment sized and some air formations.

Army Group Center covers Von Bock’s relentless drive on Moscow. Logistics must be maintained as the German army advances while the Soviets must stem the flow of Panzers as best as possible. The German player has the choice of sending a Panzer Army south as Hitler ordered historically, or keep them with AGC as the generals wanted in order to take Moscow.

These series of games is be part of the Destroy All Monsters Operational Series WW2 system.