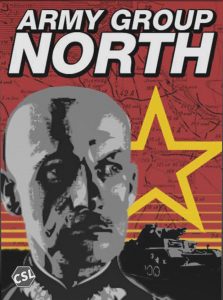 Army Group North is game 1 of the Destroy All Monsters: Barbarossa trilogy of games that can be combined together as a mini-monster. Each game by itself is a straight forward operational simulation of each theater, and all 3 games share the exact same rules allowing for easy integration. Units are Army through Regiment sized and some air formations.

Army Group North covers Von Leeb’s ascent into the Baltic states in his attempt to blitzkrieg Leningrad. While performing extraordinarily well, a long drawn out siege resulted which eventually led to a German withdraw. AGN gives players the chance to do one better than Von Leeb, with the other two games in the series, the player may even borrow a Panzergruppe or 2 from AGC…

These series of games will be part of the Destroy All Monsters Operational Series WW2 system.