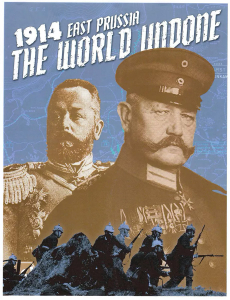 THE WORLD UNDONE (TWU) is a new operational, division level WW 1 system inspired by the brilliant late John Young’s The Marne. What results is an extremely simple, nuanced, and quick playing, immersive simulation of the first big German victories of WW1. Play is broken down into a simple Move-Combat-Move-Combat phase for each side, with units participating in the first combat phase unable to move or fight during the second. The game covers August 13 to September 13th covering both the battles of Tannenberg and the Masurian Lakes. Separate CRTs are used for German and Russian forces to reflect differences in quality and doctrine. This is an extremely low complexity game that I hope will be able to draw new players into wargaming, and remind old players why they started gaming in the first place. The World Undone will be a 3 part series covering East Prussia, Galicia and the Western Front (maybe Serbia/Austria too).

Victory is determined through a simple Clausewitz-inspired Victory Point ratio system determined by control of towns, important objectives, and casualties. Scenarios cover Tannenberg, Masurian Lakes, and a ‘Campaign game covering both operations. Variants allow for additional replacements to change the balance of things. The Russian player can win automatically by taking Konigsberg, while the German player can win automatically by eliminating a percentage of Russian SP. Players can combine the Galicia, East Prussia and Serbia Games together to simulate the entire Eastern Front in 1914.

Dedicated to John Young of SPI.