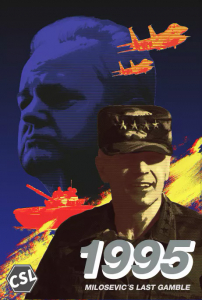 1995 is the third iteration of our Procedural Combat Series and it examines a cold war gone hot during the Yugoslavian wars of succession. The combined might of a Serb dominated JNA and a weakened but still potent Russia move on the smaller republics in an attempt to establish A Serb dominated Yugoslavia giving Russia a foothold in NATO’s backyard.

PCS is an easy to learn, but difficult to master rules-system. Instead of Combat values, unit's are printed with a Unit Quality Rating and a Movement Allowance. Combat strength is determined randomly based on unit quality, and positioning before an attacking. The result is an original system which focuses like a laser on the unpredictability of cold war-era combat.

The OOB includes a well-researched collection of available divisions and air assets. The Russian OOB is based off the militia which attacked Grozny in 1994. The JNA is accurately represented though assumed to be at full strength. Numerous other Balkan and NATO nations are represented. 1995 focuses more on maneuver and less on chrome as there are no special counters, but lots of units instead..

Design and Counters by Ray Weiss