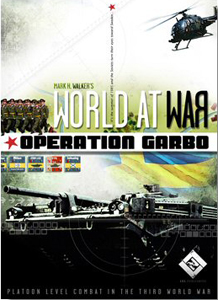 When the war began both NATO and Warsaw Pact aircraft violated Swedish airspace in order to strike each other. As a show of force, Sweden sent up her own fighters, and also filed a complaint with the U.N., but these measures did nothing to prevent the violation of her airspace. The Soviet Union was getting the worst of the air strikes and threatened to invade Sweden if the strikes continued. As the Swedish politicians mired themselves in craven bureaucratic banter, the NATO air strikes continued. The Soviets’ patience quickly withered and they went ahead with their invasion. Securing Sweden, the Soviets hoped, would neutralize the NATO air strikes and provide them with a foothold from which their bombers could more easily attack Great Britain. It also threatened NATO’s left flank and put Norway in a difficult position.

On paper the invasion was a great idea for the Soviets, but they were constrained by force commitments in Central Europe, thus only second-line troops and elements of elite parachute units and naval infantry were available for the attack. Regardless, the invasion went ahead, and it was a surprise. Sweden had little time to mobilize her army, but local Swedish commanders know how important having the initiative was, and they counterattacked as soon as they could. In the initial fighting, the few elite Soviet forces tried to overcome the Home Guard defense units. Later, the Swedes were able to organize their forces, and their armored brigade, the Sledgehammers, counterattacked. WWIII had expanded to peaceful Scandinavia, and World at War: Operation Garbo, designed by Nils Idemalm, will take you there.

World At War A scenario book including 6 scenarios, and special rules for playing Operation Garbo.

World At War All packaged in a nifty ziplock bag.