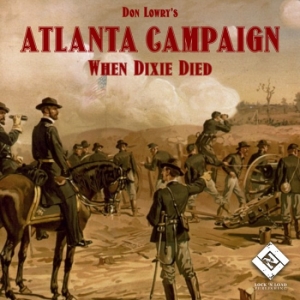 The Duel for Atlanta

In the summer of 1864, Union forces engaged the Confederate Army in a series of battles in Northern Georgia, with the goal of destroying the Confederate Army of the Tennessee. In doing so, the Union Army ultimately captured the city of Atlanta, an important industrial and rail center, thus setting the stage for Sherman's "March to the Sea" and the end of the Confederacy in the Deep South.

In this update of Don Lowry's classic design, players may choose to engage in four shorter scenarios or fight the campaign in its entirety. Leaders play an important role in the battle, and a unique combat resolution system introduces realistic uncertainty to the system