Accueil > Wargames > White Dog Games > In the Name of Justice: The Battle of Lewes, 1264 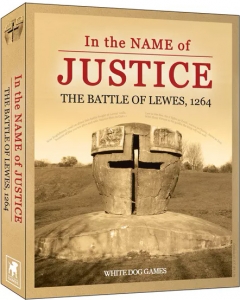 Earl Simon Montfort had gathered an army of dissatisfied rebel barons and, by stealing a march, had surprised the royal forces under King Henry III at the small East Sussex town of Lewes. The Battle of Lewes was the first on English soil in nearly fifty years and was the last "gentlemanly" conflict.

In the NAME of JUSTICE is a grand tactical simulation of low complexity about this 13th century battle in the Second Baron’s War. It is regarded as a hallmark in the political evolution of the English monarchy and part of the struggle to limit royal power in England.

Extensive research was done to provide an accurate and historical account of the battle. Unit types include cavalry, infantry, archers and even staff slingers.

The game uses a chit-pull mechanism, which makes for increased replayability and helps simulate the chaos and drama of medieval combat. Many historical and what-if optional rules are included so replay value is enhanced, allowing the battle to be explored in greater detail.

"For what is more right than law, whereby all things are ruled? And what is more true than justice, whereby matters are decided?"