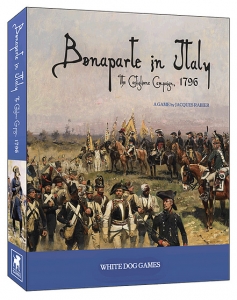 In 1796, the young French Republic was no longer at bay, having knocked Prussia, the Netherlands and Tuscany out of the War of the First Coalition. However, the French were still facing their long-time and toughest opponents: England and Austria.

Challenging the English in the high seas was out of the question, because the French fleet was no longer a match for the Royal Navy. Therefore, the French Directory ruled that the best chance for victory was a decisive land campaign to force Austria to sue for peace.

Two large French armies commanded by experienced Generals Jourdan and Moreau were to advance into Germany toward Vienna. In the meantime, a small French force was to undertake a diversionary movement in Northern Italy. This operation, on a lesser theater, was entrusted to a young Corsican General named Napoleon Bonaparte.

However, while the main French armies eventually stalled in Germany, Bonaparte gained international fame when his Army of Italy defeated the Sardinian and Austrian troops during the Campaign of Montenotte, forcing a peace on Sardinia. Bonaparte then captured Milan and laid siege to the Austrian fortress city of Mantua. The Austrians reacted by dispatching an army under one of their ablest commanders, General Dagobert Sigismund, Count von Wurmser, with the intention of relieving Mantua and teaching the upstart French General a lesson, setting the stage for what was later known as the Castiglione Campaign.

The game is played on a point-to-point map representing the region of Mantua and uses a simple system stressing the importance of command and supply. Game counters represent Brigades and historical Leaders that fought during the campaign. Combats take into account the role of leadership, cavalry and artillery. The players must carefully monitor the cohesion status of their troops throughout the campaign and choose the most appropriate time to use ‘Forced Marches’ and ‘Marches to the Sound of the Guns’ to win the decision. Additional chrome includes rules for the siege of Mantua, bridge destruction, garrisons, cavalry pursuits and optional rules for Leader casualties, the Fog of War and reconnaissance.