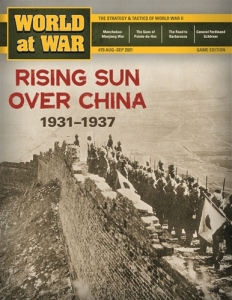 Rising Sun Over China: Japan vs China 1931 – 1937 is an operational-strategic level two player wargame covering the campaigns in northern China, 1931 to 1937. These campaigns revolved around the regions of Manchukuo (Manchuria) and Menjiang (Inner Mongolia), and culminated in the Japanese invasion of China proper, taking the capital at Peiping (Peking). There was also the possibility of Soviet intervention. The game has two players: the Japanese Empire and the Republic of China. The Japanese objective is to gain control of northern China to provide a strategic advantage for the ensuing Sino-Japanese War which commenced in July 1937. The Chinese objective is to retain control of strategic regions of northern China, thereby forestalling a larger Japanese invasion. Each hex on the map represents 75 kilometers across. Each turn of play represents one year of operations. Japanese ground units are divisions and brigades. Allied Japanese, as well as most Chinese units, are at the army and corps level, representing shifting arrays of forces. Air units represent various numbers of sorties needed to accomplish missions.