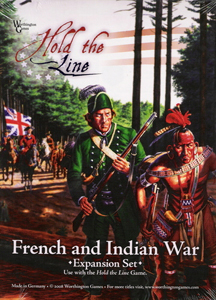 The expansion has the followings 5 French and Indian War scenarios:

Battle on Snowshoes March 13, 1758: Rogers Rangers are ambushed by combined French and Indian forces. Greatly outnumbered, the Rangers must survive until night to make their escape.

Montmorecy Falls July 31, 1759: Combined British land and amphibious attack against the entrenched French army around Montmorency Falls in an effort to break the stalemate during the Quebec campaign.

Ste-Foy April 28, 1760: The French army attempt to recapture Quebec from the weakened British army in one of the hardest fought conventional battles of the French and Indian War.