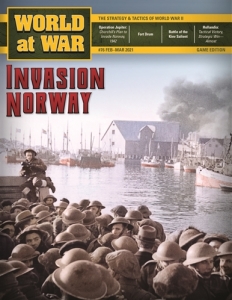 Operation Jupiter: Churchill’s Plan to Invade Norway, 1942 is a two-player wargame simulating the possible events that could have unfolded during the first 30 days of this planned but never run World War II campaign. The British prime minister had intended it as a strategic alternative for Operation Torch. A complete game takes from two to three hours to complete. Each hex on the map equals 10 miles (16.2 km). Each full turn represents three days. Ground units represent a regiment, brigade or division (or ad hoc equivalents) of about 2,500 to 12,000 men and/or 50 to 350 armored fighting vehicles. Allied forces are organized into three groupings: those of the US, British and their Commonwealth partner Canada, and the Soviet Union. The counter sheet contains 48 variant and errata counters for World at War #70, Great Pacific War and 11 variant counters for World at War #74, Munich War.