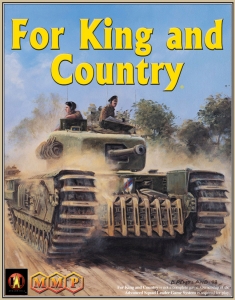 For King and Country contains the complete (in ASL terms!) Order of Battle for the British along with eight mapboards (not available in any other ASL module) and 20 revised and updated scenarios from our favorites which appeared in past magazines or modules that are now unavailable.

These scenarios have been updated to incorporate existing errata and some have been changed to try and make them better balanced scenarios. You can download the changes that were made when updating FKaC scenarios so that your already owned versions of these scenarios will be up to date!

For King and Country contents:

one full countersheet of 1/2" counters

one half countersheet of 1/2" counters

one half countersheet of 5/8" counters

one Chapter H for the British OB

96 The Crux of Calais

101 Throwing Down the Gauntlet