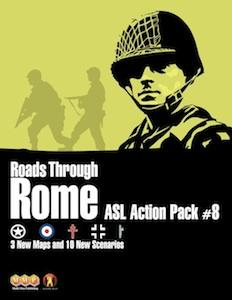 Roads Through Rome, the eighth “action pack” for Advanced Squad Leader, focuses on the war in the Mediterranean and the Allied drive through Rome and up the Italian peninsula. From the first engagement of American and German armor in Tunisia, to the entry into the “Eternal City” and beyond.

The ten scenarios included in Roads Through Rome require all ASL core modules.

Three double-sided 11"x16" mounted maps round out the package (boards 4a/b, 5a/b, and 6a/b). Each board is completely geomorphic, and compatible with previous ASL mapboards. Offering new and novel map configurations, these are sure to spark the interest of designers and players alike.

Roads Through Rome also includes optional “Australian Balancing System” (ABS) provisions for each scenario. ABS is intended to allow for scenario side selection via a series of escalating handicap bids. Among other advantages, this can help balance scenarios between players of varying ability.