Accueil > Wargames > Clash of Arms > The Speed of Heat (boxless)

The Speed of Heat (boxless) 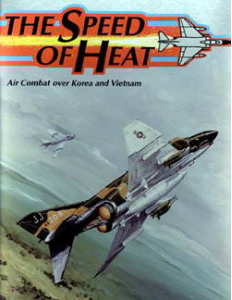 The Speed of Heat is a simulation that depicts air-to-air combat and air-to-ground combat during the Korean and Vietnam conflicts.

The game is a tactical representation with each turn represemting 12 seconds of real time, each hex covering a distance 1/3 of a statute mile, each altitude level representing 1000 feet of height, each counter representing a single jet.

Each aircraft flies differently accordingly to its actual aerodynamic properties. Each type comes with an aircraft data card depicting its qualities, weapon loadouts.

The rules included in The Speed of Heat are the second generation rules of that previously seen in GDW's Air Superiority and Air Strike.