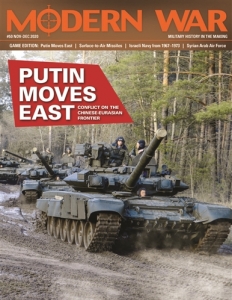 Putin Moves East is an operational-strategic level two player wargame covering a struggle for control between the Russian led Eurasian Union and a Coalition of opposing states, led by the People's Republic of China, to gain control of the Far East. Among other things, the game presumes a breakdown in Russian Chinese relations leading to open belligerency. Units represent operational task forces of corps or reinforced size; special forces; airpower; and cyberwar. Additionally, paramilitary forces play a significant role in the game rules. The objective of each player is to seize critical resource, industrial and communications centers, thereby gaining control of the Far East. Each hex on the map represents 100 kilometers from side to side. Each turn of play represents anything from three days of intense combat to a couple weeks of refitting. Ground units represent mostly corps sized task forces. Special forces units are regiments, brigades or groupings of cadres.