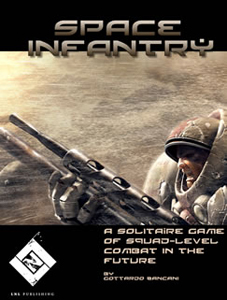 Space Infantry is an exciting new solitaire game of squad-level combat in the future. In Space Infantry you will be asked to lead an elite team of soldiers and undertake a series of missions that can be played individually or as a campaign.

An innovative system makes possible a quick resolution of the different tasks (exploration, combat) while keeping the game tense and not predictable. Six different enemies, seven missions and a modular system to dynamically generate new encounters assure many hours of enjoyment.

The module structure of the game will make possible to add new features easily to Space Infantry (missions, units, enemies, equipment): those additional components will add new options to the existing missions, increasing the lifetime of the game.