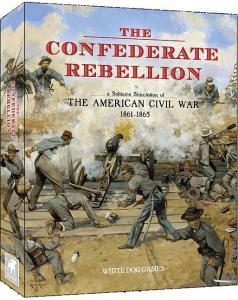 The Confederate Rebellion is a solitaire game (with optional two player rules) on the American Civil War.

In the solitaire game, the player controls the Union forces and the Rebellion is controlled by an AI. The game takes place over an unspecified number of turns. Play continues until either the victory or defeat conditions are met.

Each turn follows this sequence of play:

4. Rebel Build Phase: The Rebels may build units as permitted by certain circumstances.