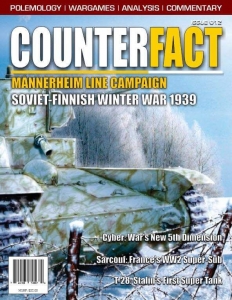 The Mannerheim Line Campaign, 1939: A 2-player game on that portion of the Soviet-Finnish War by Ty Bomba

The Mannerheim Line Campaign, 1939-40 is a low-intermediate complexity two-player historical wargame designed by Ty Bomba, which is also easily adaptable for solitaire play. It allows players to investigate the parameters of the final Soviet offensive into Finland in the late winter of 1940. For play purposes, that historic outcome is considered to have been a Soviet minor victory. Each hexagon on the map represents two miles (3.25 km) from side to opposite side. Each turn represents one week during February and March 1940. Each unit of maneuver represents a corps, division, brigade or regiment. Playing time is about three hours.