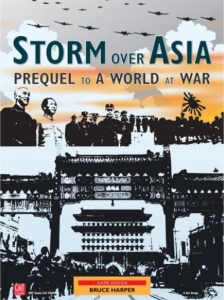 Storm Over Asia is both a companion game to GMT’s A World at War and Gathering Storm, and is a game in its own right, with its own victory conditions. Starting in 1935, Japan, China, Britain, and Russia prepare for war without being sure of just what is coming. Japan must balance its expansion in China, an impending confrontation with the United States and Russia, and the impact of the Pacific theater in a global war. China, Britain, and Russia must try to resist immediate Japanese expansion, while at the same time laying the groundwork for the successful prosecution of war in the Pacific. These short-term and long-term goals will often be in conflict, and misjudgments in either direction may have dire consequences.

Storm Over Asia allows players to explore what might have happened if:

Japan had prioritized naval expansion, even though it antagonized the United States.

Japanese admirals had focused on submarine warfare in the impending war with the Allies.

Japan had committed to jets, advanced submarines or rockets.

Synthetic oil technology had been developed by Japan.

Japan had developed a strategic bomber for to use against China … or Russia.

Japan had prepared for a direct attack on the Soviet Union, rather than first trying to eliminate the Chinese threat to is flank.

Nationalist China had defeated the Communists before Japan invaded.

Communist China had expanded its territorial base and armed forces.

Australia and India had been better prepared for war, including by building Australian aircraft carriers or an Indian air force.

YOU had been in command.

Storm Over Asia may be played as a separate game in a single session, with its own victory conditions, and may be played alone or in tandem with Gathering Storm, GMT’s pre-war game in Europe. Storm Over Asia resembles Gathering Storm in many ways, and both games have a structure consistent with A World at War, allowing for a seamless transition to whatever alternate war the players planned – or stumbled into. There are many similarities between Storm Over Asia and Gathering Storm, and Gathering Storm players will have no difficulty in playing Storm Over Asia. There are also differences between the two games, such as the mechanics for combat in China, and coordinating Japanese and European Axis strategies is perhaps even more challenging before the outbreak of war than it is during A World at War (especially in turns where China draws a random event invoking “German advisors” as the reason for increased Chinese combat abilities). Storm Over Asia includes the following:

Four Japanese Random Event Category Cards, which determine the type of random event that Japan will have each turn.

Economics based on tiles and activity counters, eliminating any paperwork.

Flexible Japanese mobilization rules, allowing Japan to emphasis civilian or military production – each at the expense of the other.

Unit construction which allows Japan to activate reserve units for immediate benefits, at a cost of limiting future options, and allows China, Britain and Russia to build military counters, if they feel they can afford to maintain them.

Variable Japanese, Chinese and British research, which can focus on air, naval, military, economic or intelligence projects, as well as short or long term gains.

A fast-moving diplomatic system, with each player allocating diplomatic counters each turn. Diplomatic targets are public, but the points allocated to them are not.

Japanese shipbuilding that allows a varied fleet, including the possibility of Japanese 4-factor super carriers.

A dynamic combat system, which covers both the Japanese invasion of China and Russo-Japanese clashes in Manchuria and Siberia.

A World at War players will naturally want to press on after playing Storm Over Asia and see how the war they have created plays out in the Pacific theater.

Storm Over Asia is a must-buy for any committed A World at War and Gathering Storm player, and is an excellent – and possibly dangerously time consuming – introduction to the A World at War universe for those unfamiliar with that game, and a enjoyable and instructive fast-paced game all on its own.