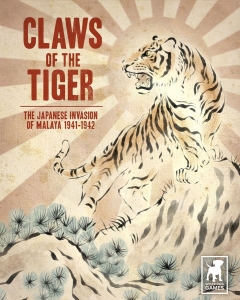 Claws of the Tiger: Malaya 1941-1942 is a two-player, beer-and-pretzels game based on the December 1941 Japanese invasion of Malaya. One player controls the forces of Imperial Japan; the other plays those of the British Commonwealth.

The game reflects the advantages enjoyed by the Japanese during the invasion in terms of command and control, equipment and training, and air superiority. Perhaps the primary reason for the so-called “worst disaster” in British military history, however, was the contrast between the effective and efficient strategic and tactical decisions taken by the Japanese high command and the ill-advised choices made by their British counterparts. The latter were simply unprepared for “modern” warfare.

In the game such decisions are the preserve of players who are likely to be better matched and, of course, under far less duress than the historical commanders. It is for this reason that the Victory Conditions are set so that the Japanese can win the game even if they do not replicate their historical achievement of capturing Singapore in 70 days.