The Lost Valley: The Siege of Dien Bien Phu (boxed) 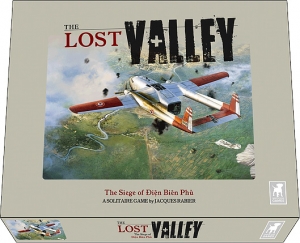 The Lost Valley – The Siege of Dien Bien Phu is a solitaire dice and card-driven board game of tactics and resources management about the battle of Dien Bien Phu, which saw the defeat of the French Expeditionary Corps in Indochina by the Vietnamese People’s Army in 1954. This battle signaled the beginning of the end for the French Colonial Empire and the first steps towards independence for Vietnam.

The French gamble to establish an air and land base deep in enemy territory in order to draw the Viet Minh into a decisive battle and destroy them with superior French firepower has badly backfired. You are now encircled, outnumbered and outgunned. You will need to carefully manage supplies, skillfully use your elite units as well as your air, armor and artillery assets while keeping the garrison’s morale high in order to hold out as long as possible. All of this in the face of adverse events and relentless Viet Minh Assaults while hoping that your resistance will have a favorable and decisive impact on the 1954 Geneva Conference peace talks.