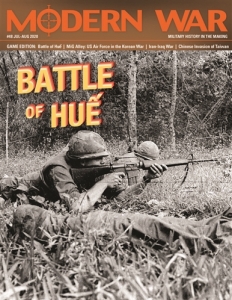 Block by Block is a two-player conflict simulation of the 1968 Battle of Hu?. Players must balance the military difficulties imposed by the challenges of constrained urban warfare and unique terrain of the Hu? Citadel, with the overriding considerations of each side’s respective political goals. The North Vietnamese player must hold the city for as long as possible, to create a media event and lay the groundwork for a new revolutionary government. The South Vietnamese and American player must retake Hu? before this process can advance too far, but not also jeopardize their own political sensitivities from casualties and heavy-handedness. The map covers an area of 13 square kilometers (approximately 5 square miles). Each turn represents four to five days. Units represent platoon/detachment to battalion sized units.