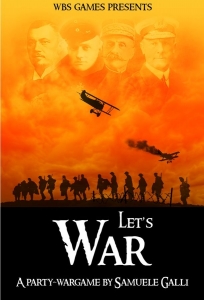 Diplomacy is over. The first artillery rounds are being fired on every front of the WWI. But the frontline combats are just the last piece of an intricate puzzle. As the Commander-in-Chief of one of the 7 European powers, Great Britain, France, Russia, Germany, Austria-Hungary, Turkey and Italy, your duty is to support your nations war effort by any means possible. Improve your technology in order to make your weapons more lethal than the enemy ones, orchestrate obscure plots in the shadow using your spies and keep your home front morale high, to avoid a sudden revolution that would throw your nation in turmoil.

Let's war is a card game for 2 to 7 players. Each player must manage his card hand made of Conflict cards, collected from a common draw deck, and National cards drawn from his own deck. These National decks are different for each nation, making the game totally asymmetrical. To increase such an asymmetry, each player can rely on a Characters deck to pick his VIPs from. These VIPs (either generals, politicians or artists) can influence the game performance of that nation as long he or she is in charge. Conflict cards and National cards can be used to improve your own army both in defensive or offensive terms, or to activate Spies to move the war onto an undercover level. The goal of this kind of war is to reduce the Home Front value of an enemy nation, attempting to spread a revolution and destroy any civilian support.

The game is able to reproduce the raging early stages of the war with bloody clashes that slowly turn into trench warfare. From time to time, as some offensive power difference arise, you will see furious offensives, quickly silenced to a new stall phase.