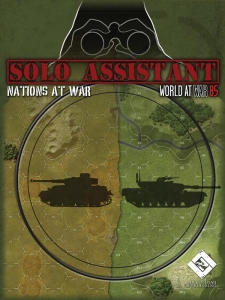 A Battle Opponent Who is Always Ready

The Solo Assistant system allows players to fight against an Artificial Enemy Opponent (AEO) that operates using a series of cards drawn from a deck, which makes decisions for the AEO game units. You can play an entire scenario allowing the AEO to make decisions for the non-player. Solo Assistant will allow you to play any complete Nations At War or World At War 85 game including any expansions, in either World War 2 or Modern eras.