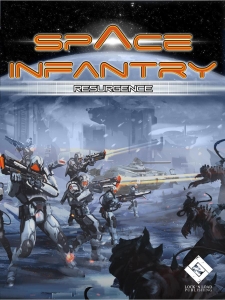 Happiness is Another Glorious Day in the Space Infantry Corps

The United Systems are under Siege. What started as isolated incursions in the Deep range, Inner Reach and even the Jovian Habitats, has escalated into all-out war against our species. Enemies too numerous to count are pushing us on all fronts and we’ve been losing ground with every passing year. Worse still, a new Xenos Mind has emerged; some dark hand guiding the alien threats against us in new and unpredictable ways.

To answer this threat and regain the offensive, a new Space Infantry Corps has been formed. Armed with cutting edge weaponry, vehicles, and strategic options, we now have the means to drive back the Xeno threat, from the depths of their hives to the cold of space.

Space Infantry Resurgence designed by Gottardo Zancani and Blackwell Hird is a robust gaming system that features a unique solitaire game and has been further expanded to provide both co-op and two-player modes of play. In Space Infantry Resurgence you command an elite squad of veteran Space Infantry soldiers taking on the daunting task of fighting against unknown alien foes, through challenging environments, using only the weapons and tools on hand, or whatever can be scrounged along the way in order to achieve victory.

Space Infantry Resurgence will immerse you as never before. There are all-new art and components, and it includes every scenario and campaign previously released for the first edition, along with new game modes and an enhanced manual all in one package. The game also features two brand new story-driven campaigns where you, the commander, make all of the strategic mission decisions. Patrol the depths of an enemy stronghold in randomly generated Hive Missions, featuring a modular environment that evolves as you explore it. Pit yourself against your friends in a head-to-head mode as they control the sinister alien intelligence and fight your squad through a persistent campaign, or work together in our new cooperative mode. Space Infantry Resurgence brings you two new variants to play through in either co-op or solitaire mode; The Last Outpost and The Horde.

Space Infantry: Resurgence is a solo to 2 player game in which players will build a Space Infantry Squad, outfit them with deadly weapons and vehicles, then guide that squad through a multi-mission persistent campaign. Fight alone, as a team, or against another player taking the role of the Xeno Mind.

Make no mistake, Space Infantry Resurgence will test you and your leadership ability as never before. Will you guide your squads wisely, acquiring the necessary traits and unique perks to navigate the dangers ahead, or will a parade of dangerous alien races win out; plunging the fledgling human race into oblivion? It's entirely up to you!