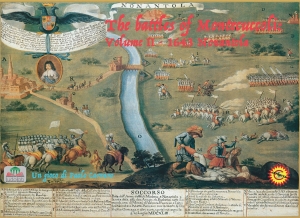 During the First Castro War (AKA Barberini’s war, 1642-1645) the Pope Urbano VII stole the Castro and Castiglione domains from Odoardo Farnese, giving them to his nepfhews Taddeo and Antonio.

Odoardo Farnese with 3000 horse soldiers invades the Romagna pushing back the enemy to the Trasimeno lake regaining the control on Forlì and Faenza but after a short truce, the Pope call again his family to the arms putting Nonantola under Siege with 12.000 men.

Meanwhile, on a request by Francesco d’Este, the Duke of Modena, the Austrian Emperor call back from Germany the best Army commander of the Austrian armies: Raimondo Montecuccoli giving him the permission to combat against the Pope’s army an his allied.

With only 4.000 soldiers and a battery of modified light guns, Montecucoli force a passage on the Panaro river, moving his army on the Nonantola side of the river then, with an incredible elan, charged the papaline carring the havoc on the enemy army that, after few hours, flee in rout.

After Montecuccoli on the Raab, this game is the second of serie dedicated to the battles of one of the greatest commanders of the XVII Century, Raimondo Montecuccoli.

This game is set during the First Castro war. The battle took place few miles away from Bologna near the fortified town of Nonantola where a big Pope’s army was defeated by a Modenese.

Army led by Raimondo Montecuccoli, recalled in Italy on a direct request from the Duke of Modena to the Austrian