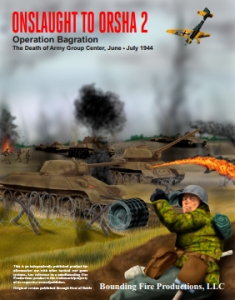 Months of extensive research along with vigorous play testing by the veteran game designers at Bounding Fire Productions brings you the completely revamped Onslaught to Orsha.

In addition to the fortified line HASL scenarios, there are two other interwoven themes in this expanded and updated version: River/bridgehead-type scenarios, and very mobile/relatively mobile actions. All capturing the varying situations of the epic Operation Bagration action. Thousands of hours of work have been invested to make this a product up to BFP standards. We hope you enjoy it.

Onslaught to Orsha includes the following:

32 action packed scenarios (10 new!) in full-color print, on both geo and HASL maps, plus a Campaign Game, Ontrack to Orsha

A new player aid for quick reference of HBRs, procedures and tables during scenario and CG play

OtO 26 Bridgehead on the Berezina Russian 40,41