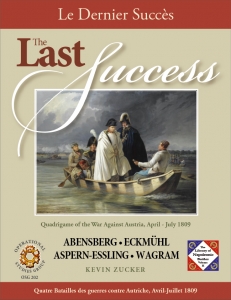 These four games explore the major battles of 1809, where the French Army encountered a modernized Austrian Army under the capable Archduke Charles. Each game shows the approach to the battlefield on the day before battle. The Aspern-Essling and Wagram battlefields are on one map. Set at the scale of Napoleon's Last Battles—525 yards per hex and one hour turns—the game retains the Command System of Commanders and Corps Officers.