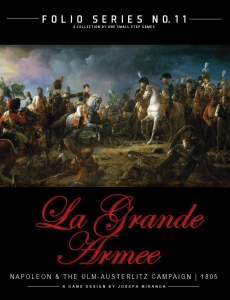 La Grande Armee covers Napoleon's 1805 campaign in Germany-Austria, a campaign which culminated in his great victory of Austerlitz over the combined Austro-Russian armies.

The new La Grande Armee wargame system recreates entire Napoleonic campaigns using a small number of pieces, largely corps and armies. Each player has a set of cards which bring in their army's special capabilities as well as random events. The game contains standard rules that apply to all games in the series and special rules that apply specifically to the campaign being explored.