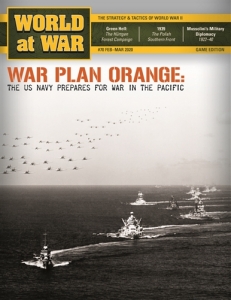 Great Pacific War is a two player strategic simulation of hypothetical campaigns fought between the United States and Japan in the Pacific Theater of Operations sometime in the 1920s or 1930s. Units include many forces which were planned but not built, such as US Navy battlecruisers. The game system shows the effects of various operations over the course of a scenario. Players conduct actions that encompass discrete combat, logistical, intelligence and other operations. A player can conduct one or more actions per turn, depending on control of bases. Ground units in the game represent corps or armies. Aircraft units represent six to twelve squadrons of aircraft. Ship units represent one fleet aircraft carrier, divisions of two or three battleships, four to eight cruisers, flotillas of twelve to twenty destroyers, or various numbers of other ships types. Each grid on the map is about 550 miles across. Each turn represents one month of operations.