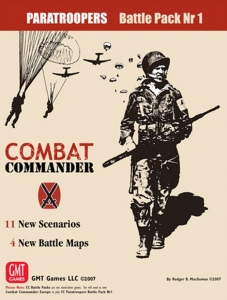 Combat Commander: Battle Pack #1 - Paratroops is the first of what will be many themed scenario packs for use with the Combat Commander series of games. The theme of this first Pack is focused on the exploits of American, German and even Russian Airborne forces. CC-Paratroops features eleven new scenarios printed on cardstock, as well as four new maps. Future Battle Packs will be similarly structured and will sometimes include new counters or new cards - with themes such as "Stalingrad", "Maquisards" and "Desert Rats" to name just a few.

The scenarios included in CC-Paratroops are:

"Fields of Fire" and "Fields of Blood" set at Lanzerath, Germany, 16 December 1944 - both morning and afternoon attacks (using a new map #25)