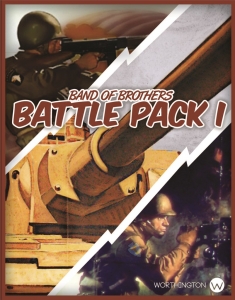 This game is an expansion set to the our Band of Brothers game series. It is 4 epic battles that are larger scenarios that are games themselves. They use a giant hard mounted game board, almost 2 feet by 3 feet, that is double sided. One side is a snow landscape and the other a summer environment. All the counters you need are included in the battle pack but you must own either Screaming Eagles or Ghost Panzer for the base rules, player aid cards, status counters, etc.

What’s Included in the Epic Battlepack 1:

What isn’t included, you will need these from either GHOST PANZER or SCREAMING EAGLES

Map 28 is the first ever snow map for Band of Brothers. It is a small town surrounded by sparse woods. The map is perfect for battles involving Russian winters or the Battle of the Bulge.

The battle counters for Waffen SS units. During the war, the SS varied in quality from near conscripts all the way up to elite units. It is the higher quality combat units the are in this package. Both the early war SS, which were a little more prone to casualties, and the late war SS, which were armed with assault rifles, are included.

Other NEW THINGS that show up include the American M26 Pershing tank, captured T34 tanks, Lend Lease versions of the Stuart and the Lee, the Russian SU152, anti-tank dogs, and “dug-in” counters for emplaced vehicles.

EPIC Scenario 46 (Map 27) – A Tall Order – Hill 246.3, southwest of Prokhorovka, Russia, 6th July, 1943: As part of the battle of Kursk, the 2nd SS Panzer Corps push North into the salient. Attacking along the axis of the hill, the run into the 154th Guards Rifle Division.

EPIC Scenario 47 (Map 28) – Death Struggle in the Snow – Berestovaya, Donets, Russia, 26th December 1941: German infantry and ground support aircraft try to hold the village for the winter against attacks by lots of infantry and light tanks.

EPIC Scenario 48 (Map 28) – Seize and Hold – Regne, Belgium, 23rd December, 1944: During the Battle of the Bulge, hasty force from the 82nd Airborne occupy the village of Regne on the unit’s right flank. The 2nd SS Panzer Division, “Das Reich,” attack and drive them from the village.