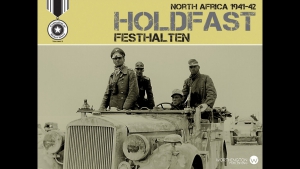 As 1941 opened Great Britain had its back against the wall. Thrown out of Europe by Germany, its military’s only bright spot was defending Egypt against the Italians. Then Germany’s General Erwin Rommel arrived in the desert and began the legend of the Africa Korps. Rommel came within miles of severing the colonial life line of the British and crippling its Empire.

Now you are in Command reliving the great campaigns of World War II desert warfare. Fast tanks, steady infantry and grand sweeping movements across the desert to trap and confuse your opponents were the tactics of the campaigns. But supply limits how far you can go and the choices you must make.

The game uses simple mechanics, with deep strategy and with a highly interactive turn sequence where both players participate in the combat and affect the results. Units move faster and further in this campaign.

One of the key elements in the game is the affect of Malta on the Axis supply situation. Every month it has the potential to greatly reduce Axis supplies which affects Axis operations of outfitting reduced units, movement and combat. Critical to the Axis player is how to use his air power. He can use it to support his operations in the desert to to neutralize Malta, not both. Malta was the most bombed location on earth during WWI