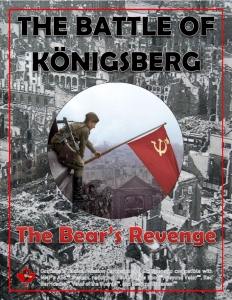 Königsberg – The Bear’s Revenge (KBR) is a tactical-level game that allows players to experience some of the challenges faced by local commanders during the Soviet Third Byelorussian Front’s bid to secure the German city of Königsberg. Königsberg was, according to British Prime Minister, Winston Churchill, “a modernized heavily defended fortress”. Three concentric rings of fortifications surrounded the city: the outer ring of defences reinforced by 12 forts outside the town, the middle ring in the outskirts, and the inner city, which consisted of a single fortress of anti-tank defences, barricades and landmines, along with several other forts.