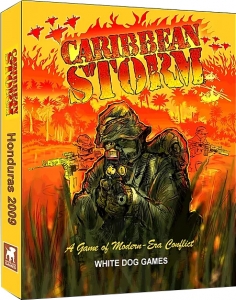 Caribbean Storm: Honduras 2009 is a simulation of a hypothetical conflict based on the constitutional crisis in Honduras in 2009. The Honduran army has removed President Manuel Zelaya by coup d’état and Venezuela, with Cuban and Nicaraguan political and military support, has decided to restore him by force. Signs of an impending attack have alerted the Honduran military. A grand tactical game of modern-era conflict, Caribbean Storm is played by two players or it can be played solitaire.

A 22” x 17” Hexagonal Map of the Honduran-Nicaraguan Region

Counters may have a movement factor in black text and/or a combat factor in red text. The game map of Honduras and the surrounding area includes a Terrain Chart and a Turn Track.